Next Thursday, the 22nd, the Athletic Foundation team will play the second tournament of the EFDN European league, after being runner-up in the Breda tournament

Athletic Club Fundazioa will once again compete in Europe next Thursday, September 22, in the second tournament of the EFDN (European Football for Development Network) league, which is being played this time in Leverkusen. In the first international tournament held in Breda, the Netherlands, on May 31, Athletic Walking Football came second, after losing in the final against German Schalke 04. The participants in this European league are amateur sections of professional football clubs, such as the Rangers Charity Foundation, Club Brugge, Bayer 04 Leverkusen, Borussia Dortmund, Newcastle United Foundation (Athletic’s first four rivals in Group B), Ferencváros Budapest, Fundação Benfica, Real Betis Balompié, FC Schalke 04, Morton in the Community, Ado den Haag, Foundation 92, Valerenga, Eintracht Frankfurt, Motherwell FC and PSV Eindhoven. It is, consequently, a top-level tournament in which some of the most important clubs in Europe participate.

Walking Football is a sport similar to football, but with the peculiarity that it is played on foot, on a small playing field and without the ball being able to be hit with the head or exceed a certain height (around a meter). In addition, it can only be practiced officially by people over 50 years of age. In the EFDN league, the teams will be made up of 6 players and 4 substitutes and it is played without goalkeepers, with goals 1 meter high and 3 meters wide. 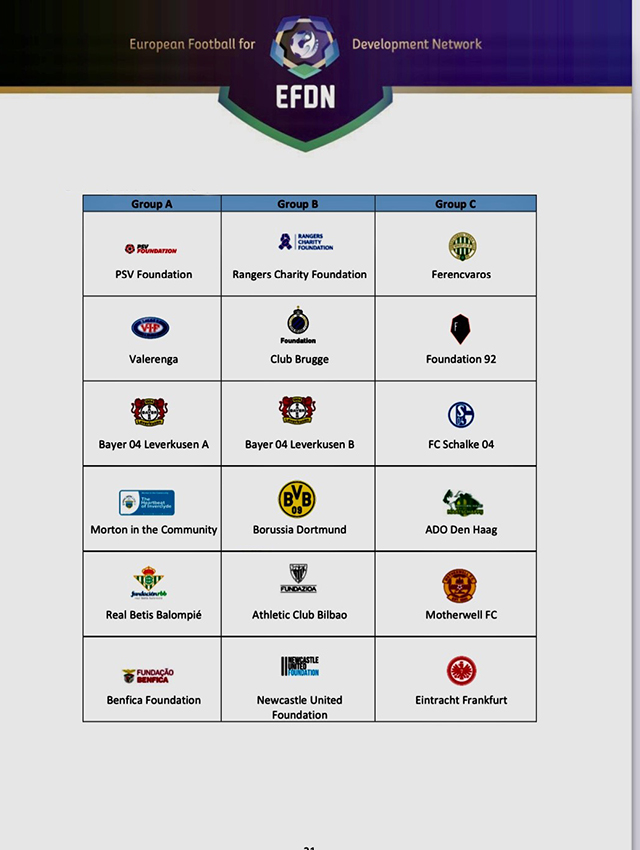 Fundazioa is a pioneer in promoting this sports modality whose main objective is to offer people over 50 years of age the possibility of playing sports and continuing to enjoy football. In short, football is played in another way, walking, in order to avoid, as far as possible, the risk of injury. Along with this first specific objective, there is another series of objectives that are common to the rest of the Foundation’s social projects.

The Walking Football project was born in the 2018/19 season and is currently a consolidated project, with training sessions in Lezama on Tuesdays and Fridays and with nearly 60 registered users. The training sessions organized and directed by technicians from the Athletic Club Foundation provide some benefits that go beyond sports practice. Fundazioa helps build a space and enjoy time in a shared way, enhancing the sense of belonging to a group, and helping people feel part of an identity as important and valued as Athletic Club.