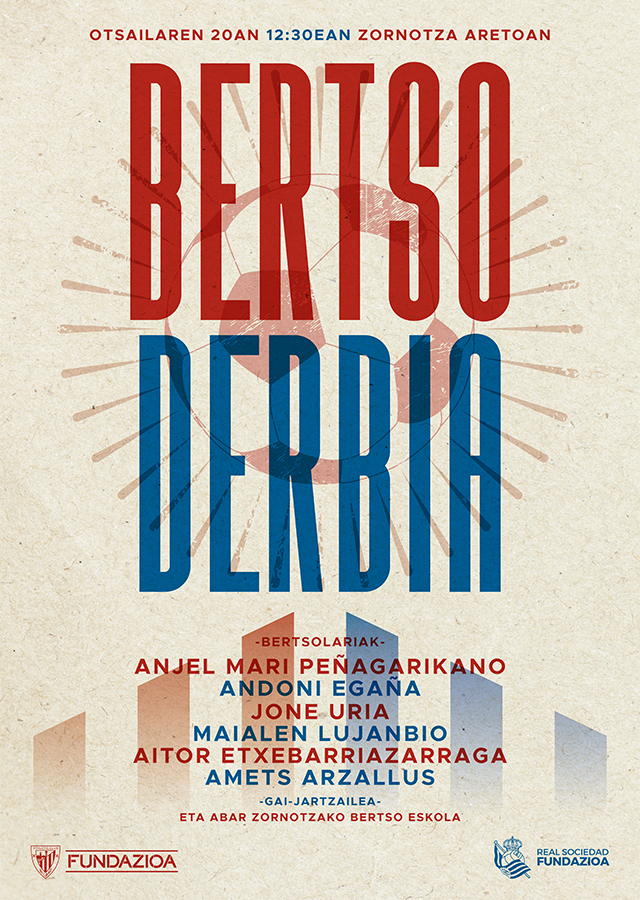 It will be held on the same day as the match between Athletic and Real, on Sunday, February 20, at 12:30 noon

The Athletic Club Foundation, in collaboration with the Real Sociedad Fundazioa and the Zornotza City Council, presents a new edition of the Bertsoderbia, number XVIII. On this occasion, the traditional festival of football and bertsolaritza will be held at the Zornotza Aretoa in Zornotza, at 12:30 noon, the same as the match between Athletic Club and Real Sociedad, on Sunday, February 20.

Tickets will be free and invitations can be obtained until full capacity by requesting them on this website www.sarrerakzornotzaaretoa.com

Since 2012, the Bertsoderbia has been held as a cultural act prior to the confrontation on the pitch between Athletic Club and Real Sociedad. The main objective of this initiative is to foster healthy rivalry, in the conviction that beyond sporting confrontation, Basque teams are united by sport and culture. In short, a cultural activity scheduled by two rival football clubs that seek to promote coexistence precisely in that rivalry.

Bertsolaris representing the Athletic Club and Real Sociedad take part in the Bertsoderbia. The bertsolaris sing in Basque and in verse in an improvised way, rhyming and with an established metric on various topics related to the Basque derby. Humor and camaraderie mix with art and rivalry in a special session highly valued by the public. It should be remembered that bertsolaritza is the fundamental pillar of the Basque oral tradition and is long before any written manifestation of Basque.

PrevThe Sifu Group, from Great Protector to Strategic collaborator
Forum for the protection of children in sportNext