“THE FOUNDATION IS THE SOUL OF ATHLETIC CLUB”

Although Athletic Club has been linked and committed to Biscayan society since its origins, the Athletic Club Foundation as such was not set up until 2002. Since then, the Foundation has not stopped growing in its efforts to make our society a better place. The General Director of the Foundation, Jon Vázquez Eguskiza, talks to us in this interview about the important programme of activities and actions, be they independent or in collaboration with different agents and social organisations, that the Foundation is planning to carry out during this new 2019/20 season.

However, before focusing on the specific projects and innovations in this new stage, Vázquez Eguskiza looks in depth at fundamental questions about the meaning of the Athletic Club Foundation.

What exactly does the Foundation do?

At the Foundation, we develop the values that identify Athletic Club, promoting all kinds of social, cultural, sporting and environmental activities that help to improve Bizkaian society and make it more sustainable, creating a meeting place and a sense of belonging.

In addition, it should be noted that the Foundation also works on and promotes the development of the Athletic Club’s Corporate Responsibility Strategy.

Do you consider the identification between Club, Foundation and fans as important?

At a Club like ours, with the social roots that we have, if anything characterises Athletic Club fans, it is their sense of belonging. As members we feel part of Athletic, and our philosophy strengthens this sense of belonging in a special way.

So it is very important that the fans find a space with a sense of belonging that goes beyond football in the work carried out by the Foundation. In that sense, the Foundation is the soul of Athletic Club, the place where all those values and intangibles that characterise us and with which the people of Athletic identify themselves are reflected and shaped. 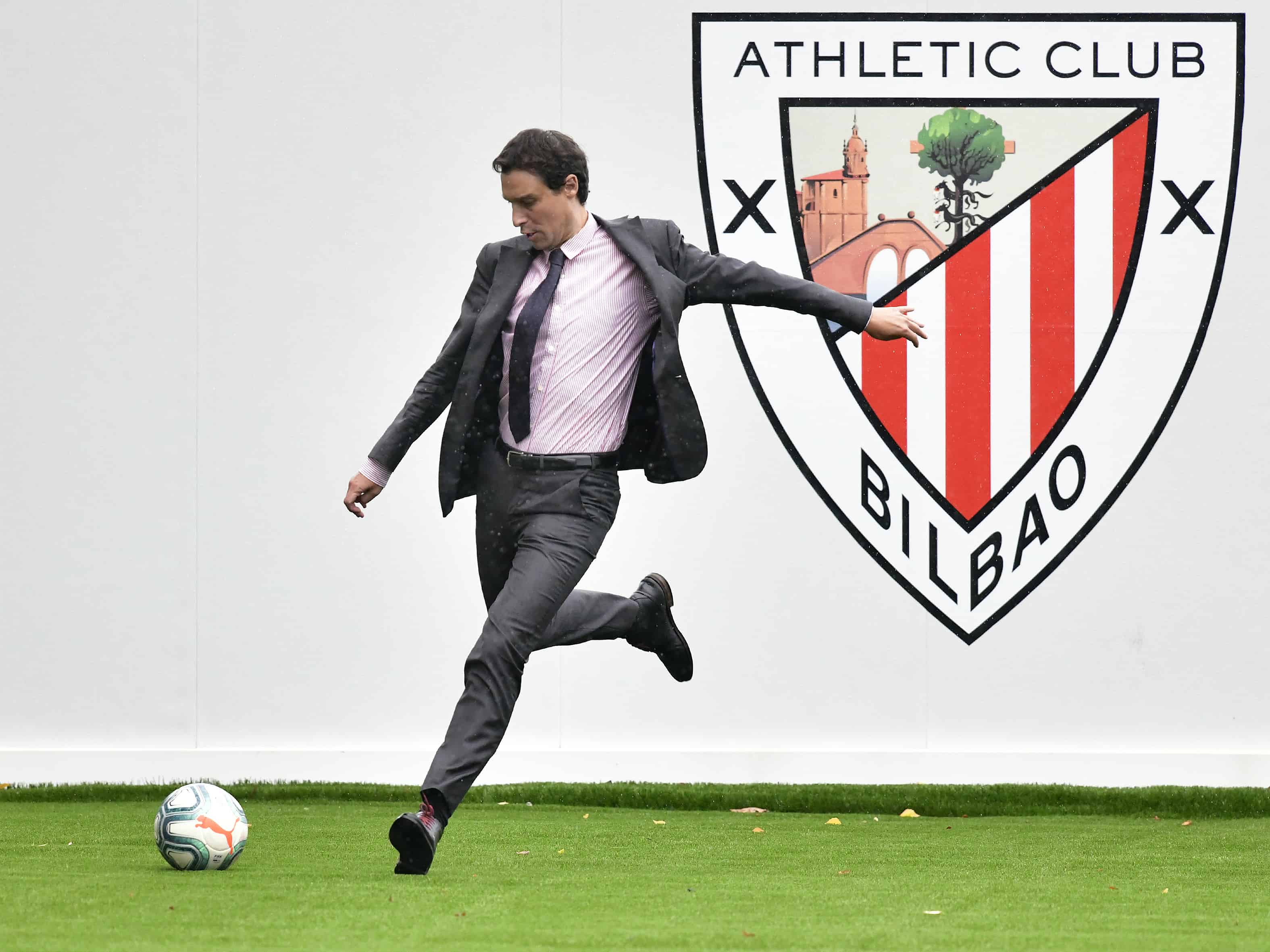 What are your goals?

To grow as a Foundation in all areas (companies, supporters, projects), to have a presence in Bizkaia and to communicate the work being carried out. These strategic levers will lead us to have a positioning and identification as the Athletic Club Foundation.

We started with 20 projects located mostly in Bilbao and soon, during this new season, we will have almost doubled that: 39 projects that we are implementing not only in Bilbao, but in the whole of Bizkaia, including 3 new international projects.

As for managing the Foundation, we will be guided by the 2030 Agenda and the 17 Sustainable Development Goals of the United Nations for eliminating poverty, combating climate change and reducing inequalities.

Another important issue would be to explain where the Foundation obtains the resources to carry out this task.

We must stress that the Foundation’s work would not be possible without the support of companies, institutions, associations and, at an individual level, people who collaborate in different ways.

We should mention that the number of companies working with the Foundation has increased, and there are now 147 in total and we are still growing.

Financial contributions from companies, which understand that being part of the Foundation contributes to their CSR (Corporate Social Responsibility), are fundamental to us. And the Foundation must respond to this trust by cooperating actively and visibly in favour of social progress. But, in addition to linking ourselves to the CSR of companies, we try to offer them something more related to our identity. In other words, collaborating with us can be considered from a business point of view as a socially responsible investment with a return. 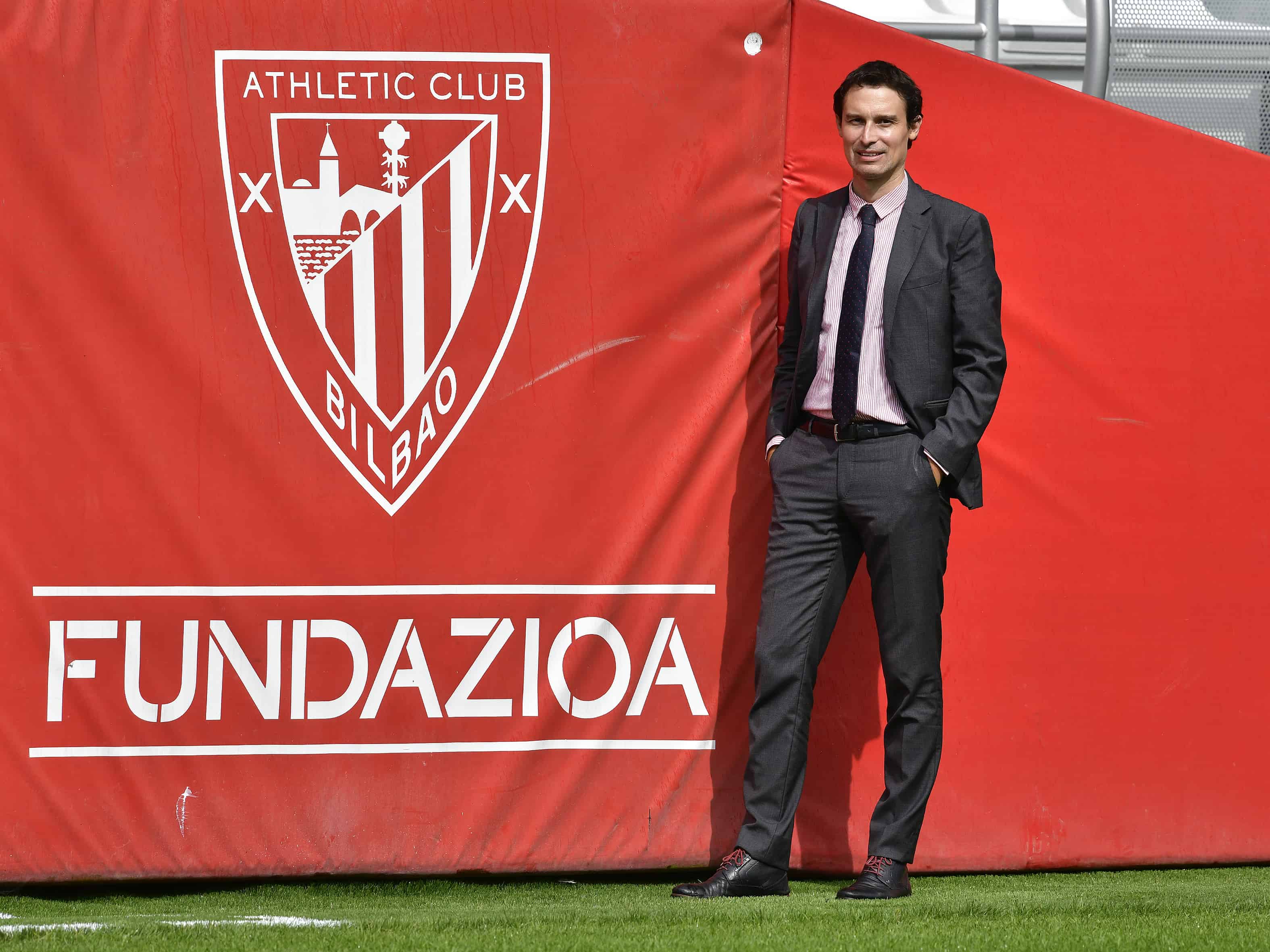 In addition to companies and institutions, you also mentioned the support of individuals.

One of the challenges that we have set for ourselves in the short and medium term is to encourage Athletic fans to become supporters of the Foundation through the “CLUB ATHLETIC” card, which has advantages linked to the Club. The contributions of supporters to the Foundation’s projects speak volumes about their commitment to the Club’s values.

And, lastly, another way to collaborate is to be a volunteer for the Foundation and help directly in our projects.

And how did you plan to accomplish the challenge that you are talking about?

One of the pillars of our strategic plan is visibility, communication. It is also a demand that we have detected at the meetings of BAZKIDEEN HITZA. Members told us that they wanted to know more about the Foundation, that we should tell them what we were doing and that we should publicise our work more. For Athletic Club fans to get involved with the Foundation, they need to know about our work first. And in order for them to know about it, we have to tell them about it and communicate it in a clear and attractive manner. I want them to know the projects and say: “I identify with this Athletic and this Foundation. I want to be part of it”. The Foundation’s new website, which we are about to launch, is aimed in that direction.

But is it really necessary for the Foundation to have its own website and channels?

Yes, without a doubt. For two reasons. Firstly, because it doesn’t take anything away That is to say, the Foundation will carry on in the Club’s channels, and even have a greater presence, because we are going to want to share more things. And secondly, because it adds to what we are doing. What sometimes happened to us was that the Foundation’s information was overshadowed by sports information, and not because it wasn’t of interest.

Now, anyone will be able to directly access the information we produce in a simple and accessible way and know that the Foundation and the Club are also working in areas other than sports.

In addition to the website, what other new features are there for the Foundation’s upcoming season?

We will offset the CO2 emissions from the travel undertaken of all our teams by planting trees and reforesting in Urdaibai.

We are working on other related eco-friendly projects. For example, our hydraulic footprint, km 0, recycling and reducing the use of plastics… specific projects that we will announce later.

What about the social sphere?

This is the area in which we are growing the most and it is also a priority for the Foundation.

I would like to expressly mention all of the associations, foundations and institutions with which we are working and with whom we share values and objectives. Our teamwork is essential for carrying out projects.

“Villagol” and “Athletic Villa”, on which we are working alongside Bizkaia Koopera, Bizkaia Provincial Council and Deporte y Desarrollo, which we will carry out in Peru.

And let’s not forget: 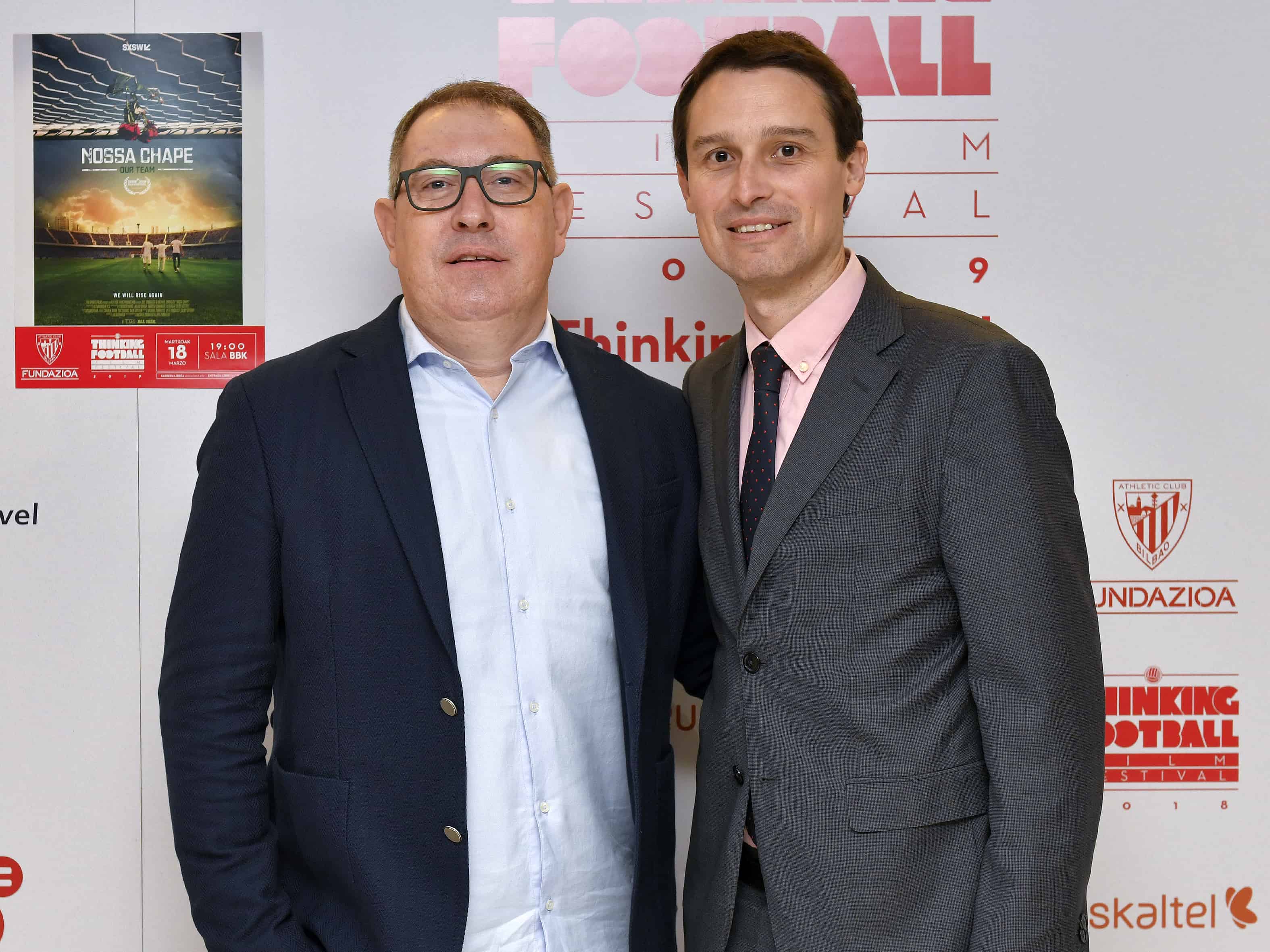 In the area of culture, we have the Thinking Football film festival and Letras y Futbol (Literature and Football), which continue to be the main features of our cultural activity.

Yes, that’s right, we are very happy with the recognition that both projects have garnered over the years and, today, they are two well-established festivals that are getting more and more social and media coverage, including international exposure. We are preparing big surprises for this season, which we will announce in due course. And let’s not forget the Athletic Reading Club and BertsoDerbia, which is a unique example in the world of a cultural activity that serves to encourage healthy rivalry between adversaries. The bertsos sung by Jon Maia and Maddalen Arzallus in San Mamés just before the start of the derby still linger in the memory.

That leaves us with sports.

Yes, we are advocating and promoting the recreational and educational aspect of football, especially in our main operating area, which is Bizkaia, and our network of clubs with which we have an agreement. The “Lezama Scholarships” project, for example, rewards ex-footballers from the youth academy who managed to combine sport with studies and whose attitude and behaviour was outstanding during their stay at the Club.

We want projects to have common areas. We are trying to ensure that the lines separating social, cultural, sporting and environmental aspects cut across the Foundation and the Club.

Do our players willingly agree to take part in these activities that you have mentioned?

Yes, they are fully committed and involved in the Foundation’s projects, they always collaborate. And not just the footballers, but also the coaches, management and directors and employees of the Club. Closeness, proximity and naturalness are words that the Foundation is trying to fill with content with the complicity of the Club.

And I can’ t forget the team of people from the Foundation, who with their talent and enthusiasm make the impossible possible. 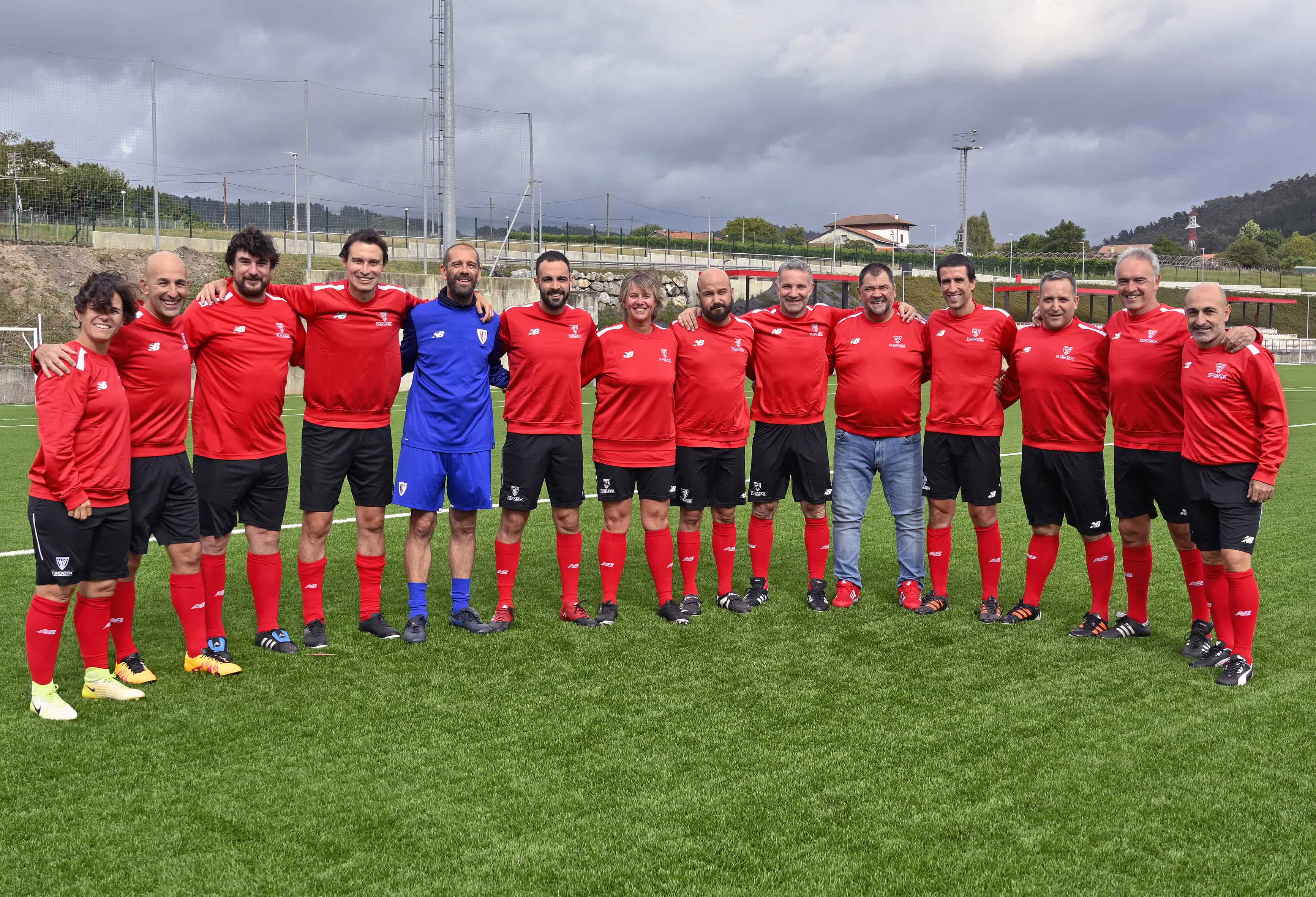 PrevTOGETHER TOWARDS SUSTAINABILITY
THE GENUINE TEAM GOT READYNext