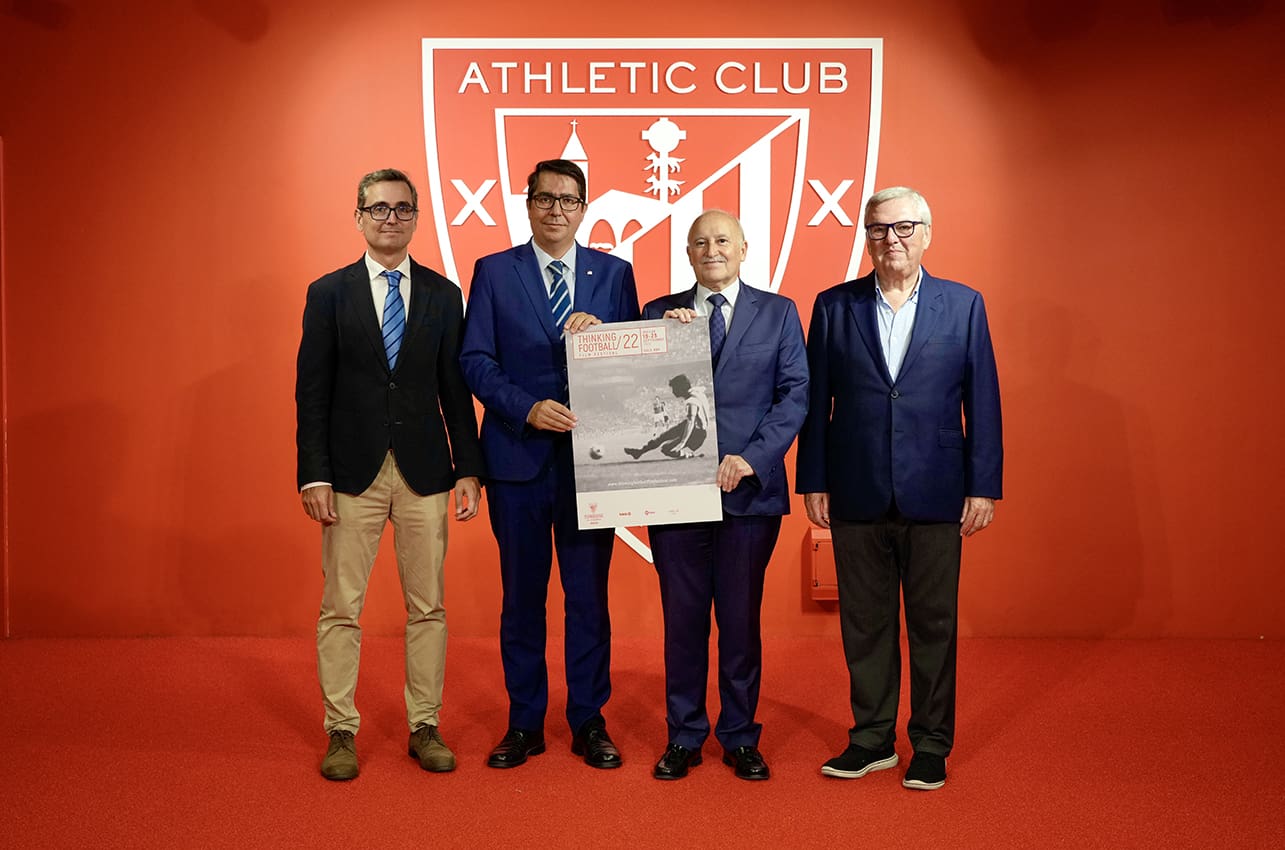 Six days of free cinema at the Sala BBK between September 19th and 25th, with the attendance of special guests such as Andy Townsend, Gordon Strachan, Alicia Vargas, Martin Bengtsson and Juanjo Giménez

The Athletic Club Foundation has presented in San Mamés the programming of the 10th edition of the Thinking Football Film Festival. Six days of good football cinema between September 19th and 25th, with a rest day on Friday 23rd.  The press conference presentation was assisted by the president of the Athletic Club Foundation, Juan Carlos Ercoreca, the second vice president of the Athletic Club, Jon Ruigómez, club board member Igor San Román, the director of the BBK Foundation, Gorka Martínez, the Councilor for Culture of the Bilbao City Council, Gonzalo Olabarria, and Jon Vázquez Eguskiza, general director of the Foundation.

Likewise, Galder Reguera, Fundazioa Project Manager, has been in charge of detailing the festival programme and announcing the participation of the following guests: Andy Townsend, Gordon Strachan, Alicia Vargas, Martin Bengtsson and Juanjo Giménez. All of them are related to some of the festival’s films and will participate in the talks that will be held in the Sala BBK Hall after the screenings.

Among this year’s novelties, the new festival website www.thinkingfootballfilmfestival.com  also stands out, where not only all the information on this edition is collected, but also other sections dedicated, for example, to previous editions or to the winners of the festival.

Opening on the 19th, “Finding Jack Charlton” and the presence of Andy Townsend

The festival kicks off on Monday 19th, at 19:00, with the UK film, “Finding Jack Charlton”, directed by Gabriel Clarke and Pete Thomas. The film is an intimate approach to the figure of the mythical coach of the Irish national team. Filmed during the last eighteen months of Jack Charlton’s life, when the legend suffered from senile dementia, it is also a moving reflection on identity and memory.

The famous former Irish player Andy Townsend will attend the screening and will speak at the film forum with the director Pete Thomas and the writer of The Guardian, Sid Lowe.

Tuesday 20th, “God save the wings” and “The three kings”, with Gordon Strachan

The second day begins with the broadcast, at 18:00 in the afternoon, of the North American film “God save the wings”, directed by Adam Knapp and Kenneth Linn. The documentary tells the story of the professional indoor soccer team that became a social phenomenon in the city of Wichita in 1979.

The highlight of the day comes with the screening at 20:00 of “The three kings”, directed by Jonny Owen. The film tells the incredible story of Matt Busby, Bill Shankly and Jock Stein, three men born south of Glasgow less than 30 miles apart, who grew up to become lifelong friends and three of the most influential men in the history of football.

This main session will be attended by Scottish legend Gordon Strachan, who will chat in the discussion with the film’s director Jonny Owen.

During the first session (18:00) the Anglo-French film “Wenger: Invincible”, directed by directors Gabriel Clarke and Christian Jeanpierre, will be screened. The story of the man who revolutionized Arsenal and took charge of the legendary London club for 22 years, told by himself.

The day closes at 20:00 with the French film “Nadia”, directed by Anissa Bonnefont. The documentary tells the moving story of Nadia Nadim, who went from being a refugee girl from the war in Afghanistan to one of the biggest stars in women’s football today.

For Thursday, the Thinking program dedicates two films to women’s football. The festival recovers “LFG” in its first session after the US Soccer Federation agreed in May of this year to the player’s demands for equal pay.

From the hand of ESPN, we get the documentary directed by Martín and Daniel Ainstein “Destino confidencial: campeonas”. The story of the Mexican women’s team that played in the 1971 soccer world championship and was proclaimed runner-up. Alicia “Pelé” Vargas, considered one of the best players of all time and top scorer for that historic team, will attend the discussion after the film.

The weekend will begin with the screening at 18:00 of two award-winning short films: “Tala’vision”, which won the jury prize at the 11mm Berlin Film Festival; and “Steh auf du sau!” an Austrian medium-length film that competed at the 43rd Filmfestival Max Ophüls Preis.

One of the outstanding screenings of Thinking will undoubtedly be the Swedish film on Saturday at 20:00. “Tigrar”, directed by Ronnie Sandahl, which tells the story of Inter Milan’s wonder kid, Martin Bengtsson. Based on the player’s own autobiography, it addresses the consequences of mental illness in sport. At 16, Bengtsson was one of the great promises of Swedish football, but he did not know the price he would have to pay to make his dream come true.

The after screening discussion will be attended by the film’s protagonist Martin Bengtsson.

Thinking puts the finishing touch to six days of cinema and football with the most cinematographic day.

At 16:00, the Italian film directed by Alessandro Scillitani, “Centoventi contro Novecento”.  In 1975, two unique football teams met. The film crew of “Salò o los 120 dias de Sodoma”, the last film directed by Pier Paolo Pasolini before his tragic murder, against the crew of “Novecento”, Bernardo Bertolucci’s masterpiece.  Two films that were shot during the same days, a few kilometres apart, and that gave rise to a deeply cinematic football match.

To finish, starting at 20:00, with a special dedication to film director Juanjo Giménez, who will attend as a special guest at the closing of Thinking.  However, before the colloquium, his football short films “Libre Indirecto”, “Máxima pena”, “Rodilla” and “Ascenso” will be screened.

All the information about the festival can be obtained on the website www.thinkingfootballfilmfestival.com Admission to all sessions is free, but it is necessary to reserve seats digitally. You can get your ticket HERE. Looking forward to seeing you there!